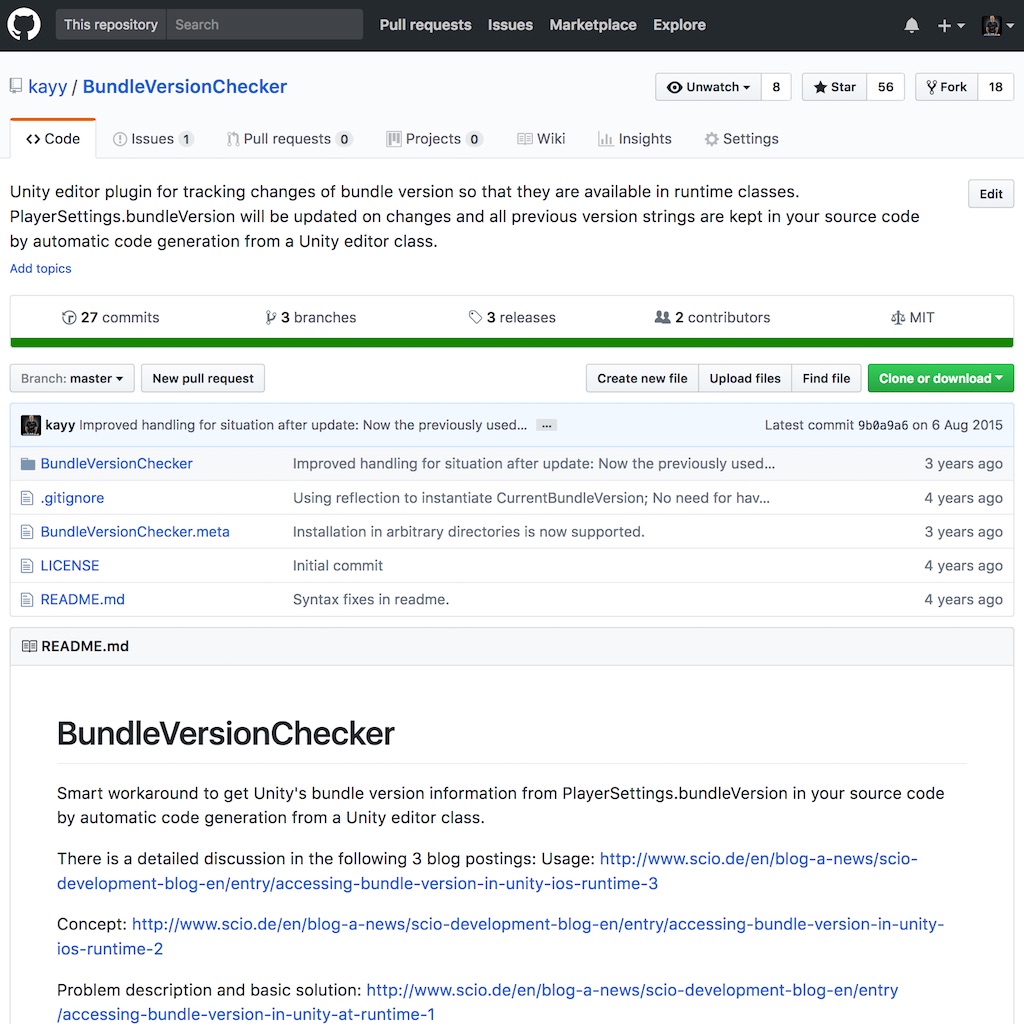 In part (1) and part (2) I discussed the concept and some implementation details for BundleVersionChecker a set of editor classes to provide access to Unity’s PlayerSettings.bundleVersion (and bundleIdentifier) at runtime and an enhanced way of managing the history of versions to provide migration steps as necessary – at least since you have installed it. Now I show you how to use it in your project.

BundleVersionChecker is hosted at GitHub under MIT license so it’s free to use even in a commercial environment.

The following steps are needed:

Getting The Current Bundle Version at Runtime

TrackedBundleVersion contains the bundle identifier, the current bundle version and a growing list of previously found versions. At the moment there is only one entry for the current version, we will look at that in a minute. Assume your current version is 0.8.5 then it looks like:

As the class resides in the runtime assemby you can now access it from your other code. Typical usage scenario:

At the moment your history has just one element, the current bundle version. If you leave BundleVersionChecker in your project a while and change the bundle version with every new release, you will see how …

First off, I’d like to mention that changing the bundle identifier in player settings does not force Unity to refresh its assets database. So always a change of a script or other asset is needed to force BundleVersionChecker to get active.

As you see the editor classes from BundleVersionChecker detected that the version information has to be updated and saved version 0.8.4 which we have faked as a previous release. Even more it is now available as public member Version_0_8_4 to be used for comparison. If you have introduced some new PlayerPrefs in version 0.8.4 that need some migration logic, you can trigger it in your new fancy class MigrationManager at app start and write something like:

OK, there is no such member Version_0_9, but it should be clear what I mean. If you saved version IDs in your app already for example by manually setting them in code, you can proceed with …

As mentioned above everything under Assets/Scripts/Config/Generated is generated code and we all know: Never change generated code. That’s still true but this one is slightly different:

At the bottom line:

You don’t like Assets/Config/Generated as output directory for the generated classes? No problem, first of all make a backup if you have made changes like described in the last paragraph. Then go to directory Assets/Editor/BundleVersionChecker and edit the file ConfigBundleVersionChecker.cs. Change the path in line

This section will grow when users provide feedback. So don’t hesitate to use the comment section below, it works without registration until spammers will detect it.

What Is Missing / Can Be Improved

Refactoring to use UnityEngine.Application.version. Note that BundleVersionChecker still can be useful as it is more than jsut reading the curren versionbut also allows history tracking.

At the moment configuration data is read from class ConfigBundleVersionChecker. But it contains local information individual for every user as well. So if several people have BundeVersionChecker configured as a git submodule and have code improvement to be sent as pull request, these config changes will be included.

A nice GUI showing the history. Maybe the possibility to add or delete old version keys.

Getting Unity-iPhone To Work with Xcode 5 And iOS 7  Next Post :
Previous Post :   Accessing Bundle Version in Unity iOS Runtime (2)